The Box Coat was a style of Tudor Era (English) Fashion seen in the 15th Century AD. They would endure well into the early 17th Century AD (in a form). Favored by Male Nobility and Royalty, The Box Coat was considered the ''height of fashion''. The Box Coat no doubt evolved from earlier Medieval Robes, often given as a component of a Nobleman's Office (as established by a King or Queen). These were long and heavy pieces of clothing. They were, as we have seen – also quite expensive.

Box Coats evolved from such Office Robes, and would eventually be more of a fashion ''statement'' rather than a component of Office. Large and ''squared'' in appearance, The Coat over-emphasized a Man's shoulders (more broad). Broad shoulders were seen as an essential part of ''manliness''. The material of The Coat, hung downward (again much as a Robe). The sides were left open in most cases with no sleeves (although some versions of later Box Coats did in fact have sleeves). Their bulky appearance was accomplished by built-in interior pockets, filled with straw (later quitting or pads). 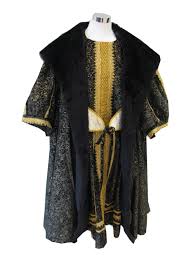