No single weapon is so seeped in legend, myth and history as is The Bowie Knife. Designed by frontiersman, soldier, gambler (and many other vocations) - James Bowie. His most noted claim to fame was that he was one of the heroes who fell at The Siege of The Alamo (1836), at the hands of Genralissimo Santa Anna and his Imperial Army. As far as the legendary knife, a "Bowie" is more of a classification of blade. Basically, any knife over 12-inches with a broad blade qualifies. In theory, most "Bowie" knives were between 12 and 30 inches long in total length (with the blade actually 5 to 24 inches). Blades are always "clipped", or narrower at the end and tapering backwards into a broader and flatter blade design.

Handles of these blades were very similar to a sword handle (even featuring a cross guard/hilt-like protector). Often described as "part knife, sword and axe", a good Bowie did all of these things. In Medieval terms, the Bowie would have been compared to a Norse Seax (in style and use). Such blades were necessary components to any American frontiersman's equipment. As for the fate of Jim Bowie's blade at The Alamo, it is unknown -  (perhaps captured by some enterprising Mexican soldier). A blade on display at The Alamo Museum in San Antonio, Texas - is an 1830's pattern (made by the original knife maker who made Bowie's prototype). It has been dated to 1837 (a year after The Siege). Historians state that it may have been made for Bowie's brother. 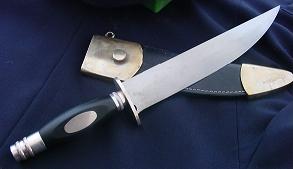