Constructed in 1503 under commission of William The Silent (The Netherlands), Bourtange is a marvel of classic Star, Horn and related “Work” building styles. Originally designed to protect the only access route between Germany and The City of Groningen (where Bourtange is located). The fort consisted of multiple overlayers of Crown and Horn Work fortification extensions built of regional stone. Various Wet and Dry Moats were incorporated at various angles in and around the different perimeter of the Fort. The Fort was completed in it's entirety around (between 100 years). The classic Star design made use of layers of different cannon and artillery emplacements (which were the primary feature of Bourtange). So large, Bourtange could house up to 5 garrisons of various troop types (or around 5,000 men). It is speculated that Bourtange also held as many as 8,000 different types of cannon. During The Dutch-Franco War (1672), Bourtange was assaulted – and withstood the siege. A series of adjacent marshes were also constructed to aid in slowing advancing enemies. Largely idle from the 1850s to 1960 – the Fort was in terrible condition due to it's age. Renovations to restore it to it's pre-1750 appearance were undertaken. It is a popular tourist attraction in the region. 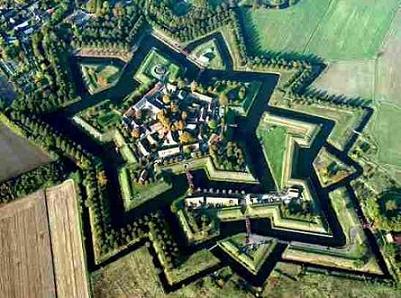