The term ‘’Bounty Jumpers’’ was applied during The American Civil War of 1861-1865. As a means of inducement to join The Army, both Union and Confederate Governments, offered Recruitment Bounties (monies), to join – for a specific period of time. These Bounties could range from $100 to as much as $300 (USD). More than a fair share of unscrupulous types devised a means of making a protracted income from this act. One presented Themselves for Service (often using a false name, etc) and joined. Receiving Their Bounty, They would then desert Service and go to another Town or City, and perform the same action again. The act became so prevalent, that by 1863-1864, anyone convicted of Bounty Jumping, was sentenced to Death by Hanging. Although more common in The Union Army, towards the end of The War, even Southern Men were participating in Bounty Jumping. 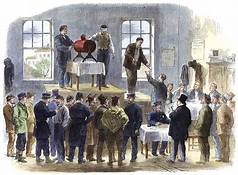