Bothwell Castle is located in South Lanarkshire, Scotland. Located on a commanding position abobe The Clyde River (some 85-feet above), Bothwell Castle was begun under commission of Scottish King David I in 1252 (with the actual completion not done until 1296). It existed for most of it's early “career” as a wooden defensive structure protected by a Palisade. It was re-stoned within 2 years (1298). Besieged by the English Forces of King Edward I (Scottish Wars of Independence), Bothwell Castle was assaulted for nearly 14 months. Using specially designed Siege Engines, the 6,800 man Garrison surrendered.

Still in “English” control by Robert The Bruce's victory at Bannockburn (1314), it was Scottish Forces that slighted Bothwell to avoid future use (or capture) – by The English. Retaken by Edward III and his Forces, an English Garrison renovated and repaired the Castle (1336). After “truce and treaty”, Bothwell was yet AGAIN slighted (this time by The English). It remained ruined until the 1360s. Falling into Nobility – Lords built a Great Hall and reinforced the 12 to 15-foot thick Curtain walls. King James IV also visited Bothwell several times.

A Donjon was also constructed (Central Keep) – at this time as well. Bothwell Castle passed between both Titled Scottish and English Lords until it was turned over to The State in 1935. It has been renovated. The Castle features 6 Rounded Defensive Towers (2 of which protect the approaches to the Outer Ward). The Landward Gatehouse allowed access into the structure (with the rear Ward protected by a cliff drop). Bothwell Castle was considered one of the most important military structures in Scotland at one time. 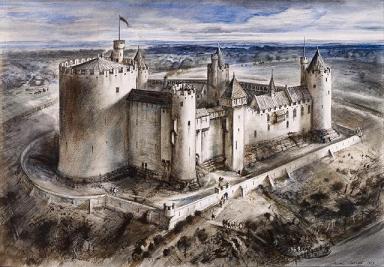