John Stetson was the primary manufacturer of Men’s Headwear in 19th Century America. He was a major supplier to The US Army  (and several Foreign Militaries as well). The common “Stetson Hat” came to symbolize those iconic and World known figures of The American West – The Cowboys. While Hollywood has created much mythos regarding Cowboys and their trademark Hat, in reality ‘ the most common Headgear worn in the 19th Century American West was a little known Hat known by the nickname “The Boss of The Plains”. While no one in Stetson’s employ coined it, it is widely assumed it derived in Dodge City, Kansas around 1865 (when the Hat was first marketed there).

Noted for it’s wide and circular Brim, “The Boss ” featured a moderately high and flattened Crown. Waterproofed and tightly woven, it was estimated  that as many as 40 Beaver Pelts were needed to produce just one “Boss”. In this was their expense. They cost the exorbitant price of $25.00 USD. As with most Hats of The Era, decoration was afforded only to the Hat Band. Different colors or patterns were used. Color of “The Boss” was often quite plain, with Black or Gray being the most popular. Earthen colors were seen as well. White, despite common misunderstanding was seldom used.

Another “handy” trick “The Boss” was used for, was it’s ability to hold water without leakage. This use was good for streams and lakes – when one lost or damaged their Canteen. It was also an ideal way to water a thirsty Horse on The Trail. With wear and tear in the rigors of The American West, often “The Boss” would lose shape. Rolled or folded Brims, along with “pinched” Crowns, created the traditional appearance of the well known Cowboy Hat. Still, it’s extra wide Brim was idea for shade in the hot Sun of The Plains.

Popularized by Lawmen  (and Outlaws alike), legendary Marshal Wyatt Earp and Scout turned Entertainer “Buffalo Bill” Cody wore “The Boss”. Worn from 1865 to the early 1890s, “The Boss of The Plains” will forever hold a piece of American West History and Legend. 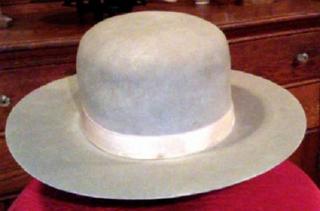