Dominant from the 13th to 17th Centuries AD, the term ''Border Reivers'' was applied to roving bands of mounted ''Bandits'' who raided homes along The Scottish-English Territorial Borders. They were loosely organized and were made up of Outlaws from England, Scotland, Wales and Ireland. In Wartime, much as was done with Pirates tuned Privateers by Royal Proclamation, many Border Reivers were pressed into Irregular Cavalry Units. Under mostly English Control during Scotland's Wars of Independence, Scotland too employed Reivers to counter their English counterparts.

Somewhat well equipped, they could afford better than average weaponry. As a Light Cavalry Force, Reivers were very effective. In a similar vein, Civilian's who were preyed upon by The Reviers could – themselves, ''create'' their own Reiver Force (similar to an American Western Posse). These Forces were tasked in combating and bringing to justice the ''invading'' Reivers. By English Law however, a Civilian Force only had 6 days to conduct counter raids. As such, only more wealthy Border Civilians could afford to mount such operations.

The building structures common to The Scottish-English Border Regions known as Bastle Houses were created out of a need to protect it's inhabitants. These homes were similar to Peel Towers, Barmkins and related fortifications of the 15th thru 17th Centuries. By the 18th Century, with more organized and effective Law Enforcement, the style of Outlawry known as Border Reivers had faded from use. In most cases, it was fear of swift and immediate punishment (death), that was promised – coupled with the creation of The Yeomanry System. 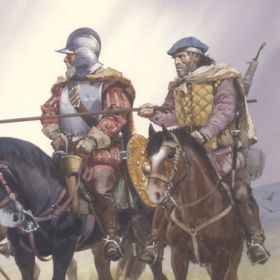