Used but Central and Eastern European Countries around the 13th Century, The Borata Spear actually was based on the Ancient Green "Boar" Spear. Like that weapon, The Borata was NOT for hunting animals. Made of Ash wood, the shafts was hardened through exposure to fire and heat. An average Borata Spear was 8 to 12-feet in length. The Spearhead was flattened and slightly flanged. On average, their width was 3 to 4-inches. This was to ensure that ANY thrusting move would deliver a mortal wound. A common "Melee" weapon, The Borata was used by both Infantry and Cavalry alike. With the widespread advent of Firearms by the 15th/16th Centuries, it's use ceased on the battlefield. The Borata did not "die out". They could still be found as Guard and Ceremonial weapons well into the 17th Century. 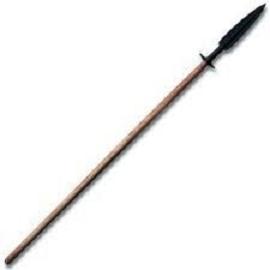