While by today’s “modern” Military standards, the term “Booby Trap” is more closely linked to any Improvised Explosive Device, the manufacture and practice of using anti-personnel devices against an Enemy is as old as the “Art of War”. It goes without saying, that The Vietnamese “Cong” (or Irregular Soldiers) of The Southeast Asia Conflict which raged roughly from 1965 to 1975 – became Masters of The Craft. Obviously incapable of a sustained, “punch for punch” Conflict against a vastly superior American Army, they relied on very ancient and still very deadly devices and procedures which were calculated to maim and kill unwary American “GIs”.

In theory, very few Vietcong and eve fewer North Vietnamese Army anti-personnel devices required actual explosive charges (although some were adapted). Most of their “inventory” was made ‘’from The Jungle” and centuries old. Effective, many were eventually adopted by American Special Forces for use as “counter methods” against them. However, the “Rank and File” Soldier was often unaware and untrained to counter such methods.

The most common devices were made from a plentiful natural resource to The Jungles 0of Southeast Asia. This material was Bamboo. A very hard, durable and useable wood – Bamboo could be cut and sharpened into almost razor sharp daggers and spikes. These would be arranged in pre-dug holes at the bottom (often 4 to 6-feet deep). Camouflaged with foliage, one could easily walk right into was called a “Burmese Tiger Trap”. Despite steel reinforces issued Boots, sharped Bamboo could easily penetrate tough leather and hard bone. The result, an injured Soldier. Most viciously, these Bamboo Spikes were coated in poison or Human fecal matter. This often caused Sepsis and death.

Another very common “Booby Trap” was deployed with The Viet Cong and  NVA elaborate Tunnel Systems. As previously written of, these complex underground passages stretched for miles and could be hundred of feet deep. Often “Dump Traps”, or ceiling catches filled with dirt and sand (when triggered) – could easily bury a Soldier (or ‘’Tunnel Rat’’) alive. Although the end result was a now unusable Tunnel spur, this could easily be circumnavigated by The VC. Other more insidious Ceiling Traps, involved the use of highly poisonous ‘’Bamboo Snakes”. Tied to small twine, they too were placed (as with the dirt), only to be triggered by a Tunnel Rat. Falling onto the Soldier, a bite would release neuro-toxins strong enough to kill within minutes.

Other Traps involved tension activated Bamboo fences or “Drop” Logs. A series of preplaced trip lines (also well hidden) could release a 5 foot by 5 foot spiked wall which used tension and momentum to strike several soldiers patrolling along unfamiliar trails in The Jungle. The goal was to slowly “whittle away” at American Forces. The end result was successful.

As stated, the limited use of available improvised explosive devices and devices made from captured or lost ordnance occurred often. American Hand Grenades could be rigged as a tension detonation device as well. Often rocks were used to cover the device. The activation pin was pulled and the trigger ‘’spoon’’ was placed against the earth. As an American Soldier would “kick” a rock out of the way, the result was more often fatal. Larger found Ordnance such as unexploded missiles, rockets or artillery rounds were also pressed into use.

While many of these “devices” and practices were seen in World War II (and used by both Allies and Axis), The NVA and Viet Cong refined “The Art”. Most of todays IEDs are based in form – on these clever and quite deadly weapons. 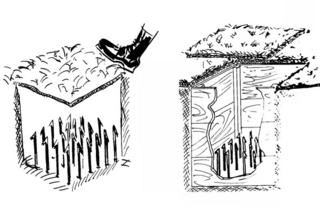