Born in Anagni, Italy in 1294 as Benedict Gaetani – he was born into a wealthy Merchant Family. He was sent to The University of Bologna to study Law. Gaetani entered into Church Service as a “Deacon” in 1281. His knowledge of Law greatly expanded his goals (becoming Cardinal then Bishop). He was elected as Pope in 1294. Taking the name “Boniface VIII”, he made substantial contributions to Canon Law with his paper, “Liber Sextus” (which broke down Church legal developments from 1234 A.D. - to his Era as Pontiff). Boniface began to develop “Royal Enemies” in the guise of The Kings of France and England in 1296, when they refused to stop taxing Clergy in those Countries).

In Rome and the surrounding Regions, Boniface became a powerful Ruler to be reckoned with. His “Family” arch-rivals (The Colona's), were defeated and removed from many positions withing both The Church and Civil Governments. Boniface is known for “creating” the “first” Holy Year in 1300. When Boniface's personal friend Bishop Saisset (of Poitiers) was imprisoned by French King Philip IV in 1301, Boniface published a Papal Bull (or Memo) called “Unam Sanctam” (1302), in it he decried The Monarchies (meaning England and France), for usurping “God's Right” and imposing “Civil Law” on The Clergy. It was a stinging rebuff. The French responded by sending an Army to capture Boniface that year. Imprisoned, he was treated very roughly. It is speculated this “treatment” was what led to his death in 1303. 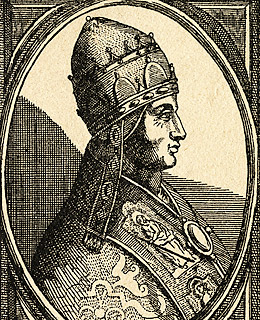