A popular accessory to many forms of female headgear during The Middle Ages and Renaissance Era, The Bongrace was first associated with The French Hood. The Bongrace was a visor-like crown that was worn in such a way, as to shield the forehead  (as opposed to the eyes). This was seen as helping keep sweat from off the face (undesirable for a Lady). Often highly embellished with embroidery and jewels, some Bongrace were quite high (again depending on Region of wear).
First seen in early 16th Century usage, the accessory was made somewhat popular in England by the short lived Queen of England - Anne Boleyn. Versions survived with some popularity in Italy. Made of stiffened fabric with a thin metal or wooden frame, The Bongrace defined Medieval fashion for a period. It was also copied briefly by Commoners (although used more for important Ceremonies). 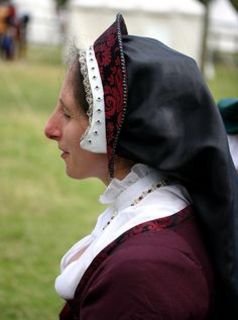