The Bogomils were members of a religious sect that at it's peak held enormous sway over The Balkan Countries. Founded in Bulgaria in the 12th Century – by a Priest named Bogomil, the sect believed and practiced “Dualism”. Dualism was the belief that the universe was jointly ruled by the forces of both good and evil. Evil (it was thought), represented the Material World (while Good was the Hereafter). The Bogomils did not eat, meat or drink wine. They further saw marriage as an “unnatural state for Man”. The sect was immediately condemned as Heretic by The Church in Rome. The Byzantine Empire imprisoned hundreds (and executed a like number). Offered with converting or excommunication, The Church could not effectively rid themselves of The Bogomils – The Ottoman Empire would by the 14th Century. 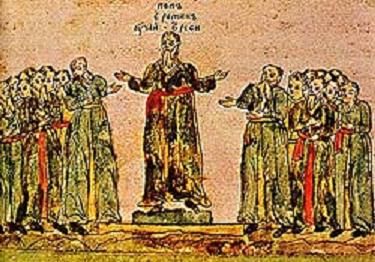