When Great Britain was building it’s Nuclear Arsenal during The Cold War of the 1950s, it was tasked with several problems. The standard deployed weapon used was known as The “Blue Danube” Device. These were non-controlled, free-falling Atomic weapons which were released from a Bomber Plane Platform. The average yield was around 10-12 Kilotons. This was not a powerful Device.

It was determined to create a more effective and reliable Atomic Defensive System. This lead to The “Blue Peacock” Project. The Project called for the creation of Nuclear Land Mines which could be deployed with The British Army of Occupation in West Berlin, Germany. In theory, these Land Mines could be activated should a Soviet Land Invasion through East Germany ever came to fruition.

The device and it’s implementation was actually somewhat ingenious. Huge Mine Shafts were either used or pre-excavated. Into the bottoms of which were placed massive empty Shell casings used for the standard components of The Danube Bombs. As such, many hundreds could be created and electrically linked to one another. A series of long term, delayed Timers would allow an Army to activate them for later detonation. It is estimated that a series of 5 such Nuclear Mines could have produced as much damage as a Ground Burst 30-Megaton Device. Each Device weighed several hundred tons.

The Peacock Project was actually deployed into Germany, but was removed in the 1960s due to concerns of possible accidental detonation due to Timers and Fuse Triggers freezing. Attempts to devise warming features (including the amazing use of animals at one point), were tried. This was a primary reason why “Blue Peacock” was finally abandoned. 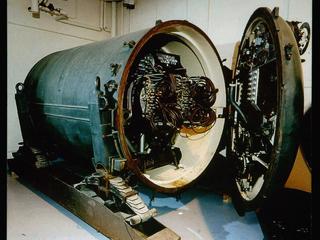