The term ''Blue Lodges'' was given to a secret Organization established in The state of Missouri in 1854. These groups were pro-Slavery and maintained the ideology that Slavery as a ''future establishment'', needed to be decided by the people of a state – especially those US Territories that had ambitions to Statehood. The ''Blue Lodges'' made much of The Territory of Kansas their ''battleground''. The group used terror tactics to force anti-Slavery constituents into voting against making Kansas non-slave when it became a State. Corrupt Politicians and Businessmen were used to sway the vote through both legal and illegal means. The ''Lodges'' were formed as a paramilitary organization, with many members being part of which ever local Militia was present (and supportive).

At one point, even The Federal Government sent Federal Forces and Law Enforcement (US Marshals), into Kansas to also stop the many violent meetings. Another program of The Blue Lodges was to recruit The Cherokee Indian Nation into their ranks. The Cherokee had adopted a form of slavery into their Society, as a means of making them more inclusive to The ''White Society'' of the Era. The Lodges tried on several occasions to incite The Cherokee to riot and revolt. The Blue Lodges would disband with the start of The Civil War in 1861, going ''South'' in support of The Confederacy. 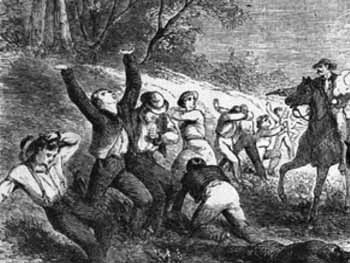