Blanche was born in 1188 A.D. In Castile, Spain. Daughter of King Alfonso VIII – she would later become the wife of King Louis VIII of France and Mother of King Louis IX. At 15 years old, she was married off to King Louis VIII (as a political move on her Father's part). By 1200 (and with the death of Louis), she became Regent to their Son. She was an effective Regent in France. Cunning with regards to Court “politics”, Blanche took no favor to the Barons and Lords that tried to usurp her young Son's rule. She quelled several attempts at such. Her Son (who inherited the Throne at age 12 in 1234) – learned from his Mother. In 1230, England's King Henry III (her Cousin) attempted “covet” the Throne. Politics and intrigue prevailed (in Blanche's favor). Henry (attempting in invoke the “Salic Law” claimed by his Grandfather Henry II), saw this as a “delaying tactic”.

It was (and it would begin to marshal in The Hundred Years Wars. When the young King Louis IX was old enough to “mount his Crusade” in 1248 – Blanche once again stepped up as Regent. This time she improved and renovated many of the major French Ports in Southern France. However, by 1250, Blanche received word that her Son had been captured in battle and was ransomed. Extremely upset, Blanche had the Messenger hung. Without additional course, Blanche “shared” her Regency with her younger Son Alphonse (who was NOT much of a Leader). Alphonse would still get his Crown (when he refused to pay his Brother's ransom). Blanche died in 1252 (some say still lamenting her other Son's “crude attempt” at Power). 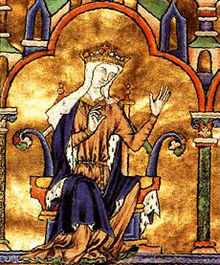