Many of The Blakely Guns were imported (from Britain) into The Confederacy before the ever tightening Union Naval blockade. The Guns were smaller field versions of the popular British Armstrong Cannon (only smaller). Developed by English Infantry Officer Theophilus Blakely (as a light cannon for infantry Regiments). The guns were cast in bronze and came in varieties of 6 pound up to an impressive 650-pound siege piece. Blakely Guns ranged from 1,800 yards maximum range to close to 1-mile. One of the most famous Blakely examples was the Confederate gun known as “The Blakely Widow” (so named for the many Union soldier's “widows” she made. Deployed by rebel forces during The Siege of Vicksburg (Mississippi/US) – this gun fired a 150-pound shell. She was effective (for a time), at suppressing the Union's “River Navy”. She was captured after the Fall of Vicksburg. 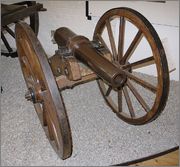