While Australia claims no ''natural born'' Pirates, or ''thrilling takes'' of Piracy off it's Coast – they can claim at least one. This would be 19th Century African-American ''Black Jack'' Anderson. Thought to be a former escaped Slave, VERY little is known of His early life (including birth). But for a brief period in the late 1840s, Anderson and His ''Crew'' terrorized Western Australia and New Zealand.

Anderson and His several Ships were noted for attacking Commerce Vessels returning with pelts and related items of The Seal Trade. These commodities were quite valuable and Anderson made a name for himself (perhaps in the range of hundreds of thousands of USD).

Hunted by The British Royal Navy, Anderson evaded them for many years. It was said that He and His Crew retreated to one of the many small islands off The Western Coast of Australia, welcomed by local Native Tribes. Most agreed that he died of natural causes in the 1860s – but His burial place is only speculated at. 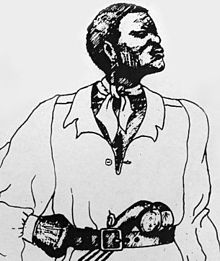