A coinage from The Middle Ages, The Bezant (or Solidus and also Nomisma) – was the “standard” coinage of The Byzantine Empire. Seen in the 1030s, it weighed 4.55 grams and was almost pure Gold. It entered into a period of “debasement” - but was re-established in 1092 as The “Hyperpyron”(in Italy The “Perpero”). It was by this time only 20% Gold. The Bezant seemed to be “constantly” in a state of debasement when in use. It was ceased to the standard in The Empire after 1350. 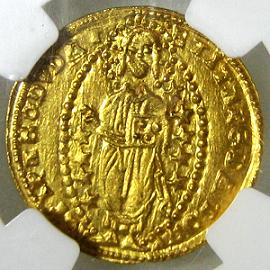