An extremely popular 14th Century ''Romance Tale'' – Bevis (or Sir Bevis) became published in France, Germany and elsewhere in The Medieval World. A common tale which encompassed the heroic nature of a Knight and his Creed, but also established elements of later examples of honor, courage and of course – ''the Heroes Death'', which was to become a very popular construct for Medieval Writers.

Bevis was the Son of an English Count and a Mother reputedly the daughter of The King of Scotland. Weary of her marriage, she conspires to talk her husbands position and power bu having him ambushed and killed. Achieving this – and creating a paradox of sorts, she conspires to have her own 10 year old Son (Bevis) killed as well. A kindly Tutor of Bevis secrets him away before the act can be completed.

Growing up abroad, Bevis becomes a strong and talented Knight. Well aware of his Mother's treachery, Bevis sets about to reclaim his Father's position. A series of battles leads him to his own love (which bears his Sons) – as well as his eventual ''bloody death'' in a heroic ''last battle''.

While the exact authorship of Bevis will never be known – as it appears to have been added to by subsequent Societies as part of their ''Heroic Legends'', some Historians cite a Bevis myth back as far as 3rd Century AD Rome. 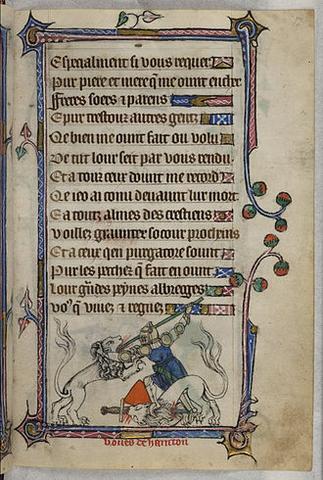