Also known as the “Bestiarius”, these were Gladiators trained to fight wild animals (primarily Lions, Tigers and Bears). Some Historians place Bestiarii as the “lowest” (or less trained) of the Gladiator Ranks. A matter of opinion, The Bestiarii were given mostly Pole Arm weapons and Shields for defense. They were also “lightly” Armored (giving them some chance of survival via range of movement). In most cases, the “Beasts” were released upon The Bestiarii in 2 ways. Often special “trap doors” leading to lower Arena levels, would be used. Once opened to the primary “Performance” level, the Beast in question was released (often set on a long chain). This provided an “attack range” for both The Bestiarii and the animal. The Fighter was expected to engage. If he did not, he was killed (by Archers or Spearmen). Another “release method” was to simply set free the animal into The Arena without restraints! The goal was simple (for the Fighter). Kill the beast to survive. In some more “crueler” cases, a poorly performing Gladiator (or one earmarked for “retirement”), would be cut on the arms, legs or back. Not a serious wound, the object was to have free flowing blood present. The soon to be released “Beasts” would be purposely starved for several days prior to the match. The resulting “blood lust” would make the already aggressive beast – EVEN more so. 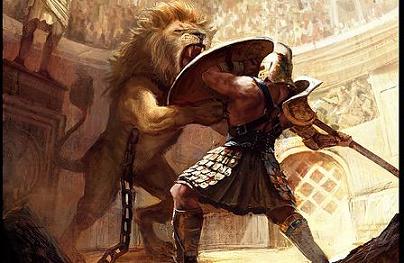