Flown in 1791, The Beman Flag  (which was named in honor of Nathan Beman of Ethan Allen's "Green Mountain Boys"), was one of the first National Flags made to include the first "new" State since the founding of The United States  (The 13-Colonies). The newly included 14th State of Vermont in 1791, created the problem of how to include future States into The National Flag. With more clear cut format, this Flag was created by Nathan Beman. It included the non-traditional 7 White and 6 Red Stripes seen on some earlier Flag versions. The Blue Canton was featured as a Cross Pattern of 12-White Stars. Two additional Stars were placed near the bisection of The Cross. It's haphazard design was used only in Vermont, and served to create formal Regulations on how future State "Stars" could be added. 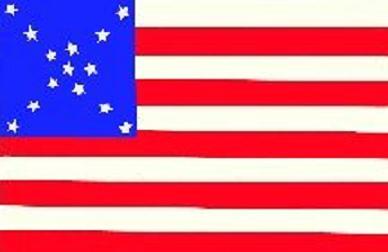