Development of Belvoir Castle commenced in 1168, when the property was purchase by French noblemen. Given to The Military Order of Knights Hospitaller, the Knights immediately began construction of the fortress. Located near The Sea of Galilee in Israel, the need for a stronghold in the region was of utmost importance. It's commanding plateau (some 1,600 feet above the Jordan River Valley), was an excellent site. It's location would prove a major obstacle to any Muslim advance on Jerusalem. Belvoir was initially surrounded by a Moated defense system that was 66 feet wide and 39 feet deep.

Of the Concentric pattern design (and favored by many Crusader engineers), Belvoir had 2 sets of defensive perimeter walls. In addition it had no central Keep. 7 defensive Towers were originally constructed (1 at each wall conjoinment with 2 additional Towers attached to the center of the North and South Walls - the final attached to the Western far wall). Belvoir Castle was designed similarly to the Ancient Roman Hill Fort of the late 3rd and early 4th Centuries A.D. Bombardment Vaults (protective areas reinforced to withstand attack from siege weapon projectiles), were also incorporated throughout Belvoir. The castle had only 1 Gatehouse (on the Western wall).

Belvoir Castle was first attacked by Muslim forces in 1180. The Hospitaller Knights were able to withstand this assault. In 1182, the forces of Saladin and Baldwin IV (Jerusalem), met and fought nearby Belvoir at The Battle of Belvoir Castle. The Hospitaller Knights lent troops to the battle and took care of the wounded after the battle (which was a Crusader victory). With the defeat of Crusader forces at The Battle of Hattin (1187), Belvoir Castle was besieged. The Knights fought valiantly, but could not withstand repeated attacks without reinforcements. They surrendered Belvoir in January, 1189.

Controlled by local Muslim forces until 1219, it was ordered slighted by the Sultan in Egypt. Belvoir was eventually ceeded to The Franks in 1241. They retained control until 1263 (making many repairs). It eventually reverted back into an Arab village (as so many Crusader castles did). In 1947, a civil war in the region damage Belvoir. The local Government (fearing that it still had some military importance), ordered it slighted again in 1963. Still, Belvoir persisted. It has been protected by Israel since the 1970s. It can still be visited. 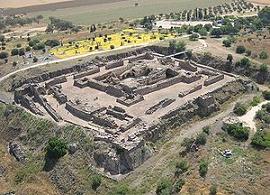