With it's origins going back to possibly The Bronze Age (3,200 BC), the simple "Belt" is truly a "companion" of Man in his journey through History. The Belt of today is very much different fashion component that it was Centuries ago. It's use to "hold up one's Trousers", was not even considered applicable in The Middle Ages. Belts were used sporadically as both fashion and  the very practical need to carry personal articles.

In fashion terms, Belts were quite intricately pieces, constructed of metal "hooping" or pulled wire strands. These were popular styles with Nobility in the 10th and 11th Centuries. Belts were worn as accessories, to be seen and admired. Other examples were made of fine cloth and quite embellished. Worn over the outer most garment, they were often 3 to 4-feet long and looped several times over. The resulting knot created was worn on the front (and later hip). Placement in the Belts entirety was closer to the Lower abdomen (as opposed to the waist, as would be later done).

It was with The Belts inclusion as a piece of Military equipment, that it began to resembled today's version. Military Belts were made of thick leather (and threaded as was the fashion). Soon buckles  (open faced), were created, to allow for quick release. This was important. With the carrying is a Sword, Dagger or Knife, these were often unsheathed. Worn through The Belt, with the blade pressed against the body of the wearer (supported by the leather). With Scabbards become more used, Belts would be specially designed to accommodate them *in different patterns and designs).

By the 14th Century, Sword Belts - would be copied as a fashion, by Nobility. Now made of sturdy leather  (and some incorporating the new Buckle), began to change how Belts were worn and used. Shortened and worn (still on the outer most garment) - about the waist, Belts would continue to evolve with Fashion to our current usage of them. 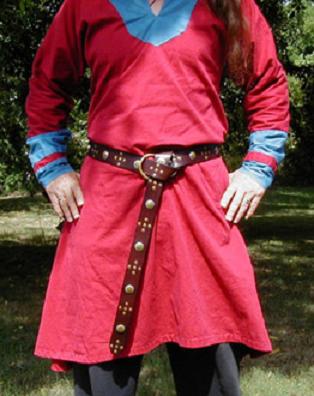