Known as The "Minerva", The Automitrailleuse vehicle was one of the first Armored Cars that saw Combat in World War I. The Belgium. Aray initially fielded them without armor, using them as sharpshooter and machine gun mobile platform. Within the first year of The War (1914), a redesigned 1-inch armored plate chassis was installed. Completely enclosed, the roof had an access port by which a crewman could exit to fire the vehicles Hotchkiss .303 Machine Gun. Some later versions also had a 37mm Cannon installed. The Automitrailleuse was supported by 4 solid rubber tires. Later models featured think steel jackets which protected the tire and lessened wear from the weight. The vehicle wad a 6 cylinder engine capable of 25 mph. The Automitrailleuse was so reliable, that although outdated by World War II, these were still used up to 1941. 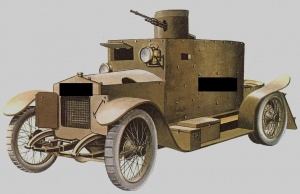