Also called a "Melee Match", this variation of The Hastilude, was popular in the 14th through 16th Centuries. In such a Match, a large Field was chosen. From as little as 5 to as many as 50 Knights of all classes would be given the opportunity to "fight" each other "en masse". After defeating one Combatant, a Fighter could move on to another. Horses were not permitted. Normally, Lesser Knights participated in The Behourd. The events also saw the use of "Teams" against other "Teams" (very much as Allies would be on a battlefield). Spectators would often bet on which Team would gather the highest Points. The Behourd was not "scored" as part of the Tournament. 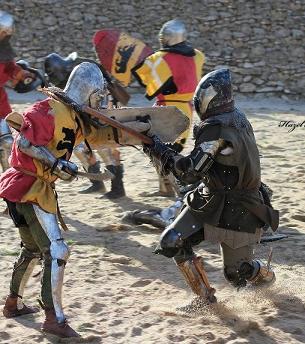