The Beguine Movement (12th through the 14th Centuries), was characterized as the only Medieval women's Religious Community to run SOLEY by women. They did not take vows or become Nuns. They did however model their lives as close to those Religious who did. Their guiding principle were: Spiritual Purity and a simple unadorned lifestyle. First appearing in Belgium around the 12th Century, the Movement soon grew to other parts of Europe. Many of The Beguines came from wealthy or Noble stock. They live to give to charity – while others served as Nurses or sewed. Some even begged for finances on the street. Often to the “horror” of their wealthy families, Bequines operated out of their homes until whole communities were established by them. Known as “Beuinages”, many European Cities could “boast” that 18% of their adult Female population were Bequines. Known for their piety and mysticism, many would leave behind extensive writings from the Era for future historians to see what life was like (not only in the Middle Ages), but the life of a “common” female. Bequines are credited with being the prototype of modern Feminism. 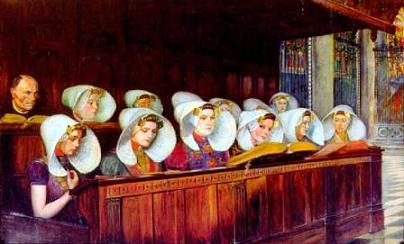