Possibly 10,000 years old, The Art of Beekeeping became an important component in Medieval Life around the 13th Century forward. The natural by-product of The insect Bee was naturally Honey. However, another “leftover'' was Beeswax. In this was created the basic component that was a staple in Medieval Culture – The Candle.

In practice, The keeping of Bees and their harvesting was seen in many Monastic Orders as a means iof not only producing food and Candle Wax – but of creating an income source. This was important for the existence of The Order. Much of European Beekeeping was “pioneered” by these Religious in England, France and Germany originally. Hives were man-made from dried mud and clay, with Combs (Cells) taken from wild Bees and installed inside. Likewise a Queen Bee and Drones were placed in The Hives to begin production of a “working” Hive.

The use of “Smoking” was also pioneered by Religious. Using smoldering Barley or Wheat Stocks later Hemp), was placed inside Hives to “sedate” The Bees in order to remove Combs ready for harvesting. Bee Hives were protected in Winter by removing them to enclosures and kept warm The insects produced very little, so maximum harvesting went from Spring to early Fall in many Countries.

Bees can be dangerous. Multiple or massive Stings can bring death to some. Protective clothing was mostly unheard of. Monks wore heavy Robes that helped protect their bodies. The development of Protective “Basket Masks” were created with afforded protection to the face and head. These Devices would evolve into the same Facial Masks used by Modern Beekeepers today.

The use of the by-product Honey was not originally seen as it is today. A “delightful sweet” such indulgences were often frowned upon by The Church. Often, Honey was mixed with Vinegar. This was used as a form of preservative used in a variety of forms. When used as an indulgence, only Nobility and Royalty could afford it at any rate.

Combs were eaten as food as well. However, another by-product of Honey production for The Bee was Wax. Harvested and liquefied, it was quickly seen as a source for The Chandler. Religious would sell Beeswax readily to them. The Wax could also be used for official Sealing of Documents, both Secular and Religious in nature.

By the 17th Century however, many private Citizens with the ability had begun to manage and harvest their own Beekeeping endeavors. The Art became an accepted Vocation from which Guilds were even formed. Honey by this time was seen as a staple in the making of “Sweet Treats” and various cooking sauces. Still practiced today in many Countries, Beekeeping is seen as an Ancient and time honored Position. 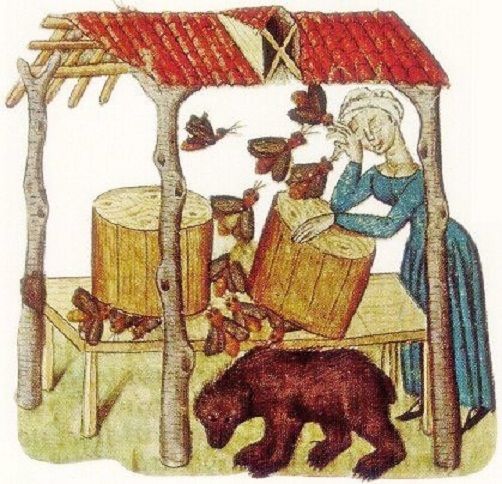