One of the oldest (and possibly the first), flags raised in contest against The British at the start of The American Revolution. Said to have been flown at Concord, Massachusetts when Colonial Militia took revenge upon British Infantry for The Battle of Lexington, Massachusetts (1775). The Beford Flag [re-dates The Gadsden Flag. Carried by The Bedford Minuteman Company, it's origins were possibly based on a Family Crest (Scottish or Prussian). Designed of a field of Scarlet Red, it further features an armored arm clutching a raised sword. The “arm” is extending itself from a “heavenly cloud” (symbolizing justice given). The motto “Vince Aut Morire” (Latin) is written into a banner scroll on the flag which translates to “Conquer or Die”. The Bedford Flag was also known to exist as early as 1660 – having been carried by a Massachusetts Cavalry Militia. 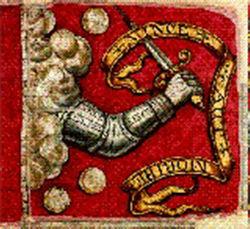