Prior to The Middle Ages, (Ancient Greece, 2nd Century B.C.) - Bestiaries were written studies (by Scholars), of known and unknown animals. They were often illustrated and held moderately accurate accounts. However, in cases were insufficient facts were available – many Scholars “speculated” on purported types and species. Many were based on local lore and legend. In many cases, more “fantastic” beasts and creatures were attributed to “The Gods”. Some of these works survived into The Middle Ages. With these as a rough “guide” - Medieval Bestiaries came into light. Complied and illustrated by Religious (Monks, Priests and Friars) - “Morality Lessons” and “Christian Overtones” were heavily incorporated into these works. France and England produced most of these volumes (starting in the 11th Century). As myth and legend were proven – many of these “mythical beasts” became just as “real” and actual animals. Some continued to propagate the legends on which they were derived. By the 16th Century, some attempts to create more realistic works were attempted. Most Bestiaries were discounted by The Age of Enlightenment (but some would continue nonetheless). Many Historians trace the development of the “non-Scientific discipline of “Cryptozoology” to The Bestiaries. 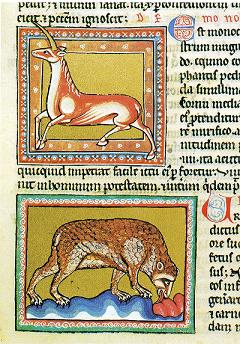