The “Bear Leader” was the principle Organizer of the often cruel Medieval Sport of “Bear Baiting”. This was a “Sport” in which a semi-domesticated Bear was placed into an Arena. “Hunters” (paid Performers), would then engage the animal with Spears, slowing antagonizing the beast with short stabs and thrusts. Bets were made on how long it took the animal to die – as well as how much damage was done to the performers.

The Bear Leader would parade the chained animal around a Town, inciting bets to be placed for the up-coming Contest, as well as charging a small fee for the animal to perform various feats. Popular in the 14th Century, by the 16th Century – most of the violent contests stopped, with The Bear Leader being a single performer all unto own. The Occupation would eventually be absorbed into Circus venues. 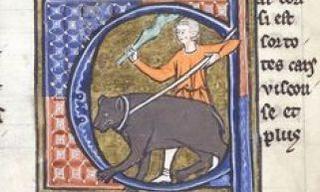