The term “Beakhead” was related to 16th and 17th Century Sailing Ships, and was located at the Bow (or Front) of a Ship. They extended outward from a Ship and allowed Sailors to access The Bowsprit. It was from this Mast point that Spritsails were affixed. Because of The Baroque Era, most Beakheads were quite elaborate in construction and design.

In addition to the previously discussed Figurehead, often smaller statues and tableaux were carved into The Beakhead (as was The Era’s style). Often, The Beakhead was brightly painted. Another “functional use” of The Beakhead was that it was used as the Crew’s Toilet or “Head”. Refuse would drop directly into The Sea.

Although a fixture for both Merchant and Warship, The Beakhead was dropped from most Ship designs by the end of the 17th Century, with Crewmen being confined to a more “traditional” Toilet or “Head Room” located in the Rear of The Ship. Some rare examples have been preserved to date. 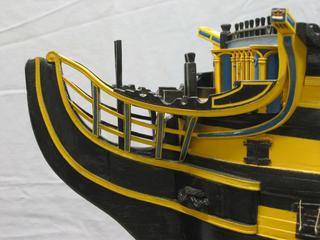