This style of defensive structure goes back many thousands of years (no doubt developed with the first fort or castle structures). During the Middle Ages, they were seen around the 13th Century (continuing onward – in some form, until the end of the 19th  Century). Comprising of a parapet and or wall defensive system, Battlements featured rectangular gaps (Crenels or Embrasures). This style would add a defensive element (simply) without the need to construct towers or additional defensive structures. The term “embattled” developed from crenelling existing walls, Fortified Estates or even free standing Towers. As for roof tops (as in Keeps and Donjons), the Battlements added to the roof ceiling would create a protective measure for troops to fight from (archers and related soldiers). Battlements also served as form of decorative art and a major component in Medieval building designs (even when the building was not necessarily defensive in nature). 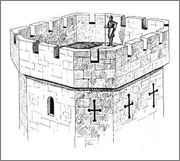