Long before the Age of Communication advanced to a point where communication between battlefield Commanders and their soldiers meant they could talk to one another in “seconds”, the primary form of relaying information was the use of fife and drum. As old as war, drums were used in battle to relay information, maintain marching order in formation and “calming” soldiers – during the “heat of battle”. Drums were formed from carved pieces of wood (often chemically or heat treated). Shaped in a variety of ways (every Country had it's own technique) – originally stretched and cured animal hides were used for the snare pad. Varying methods of tension (to stretch the hide) were devised to tighten the hides for their characteristic “sound”. Along with the development of The Drum, came the development of the fife. Possible one of the first musical instruments taken into battle in Ancient times. Flutes and other “wind instruments” were used much in the same way as were drums. Hollowed pieces of wood were carved and shaped. Note holes were eventually created to produce musical chords. Due to the high pitch, the instrument was perfect over the “din of battle” (especially with the advent of guns). A technique involving a gentle “rolling movement” (back and forth over and under the lower lip of the player), would produce the now – well known sound.

With the beginning of The American Civil War, all Nations were using this “Ancient Method” of communicating orders and information on the battlefield. Although the Telegraph System (a revolutionary form of sending messages great distances via electrical impulses), was being pioneered, it was still not effective in the middle of a battle. At the beginning of The Civil War, both Armies used a Drum and Fife Corps. They were composed of young boys (12 to 15 years old). Traditionally, these “Drummer Boys” were a staple of all Armies. Taught (and self-taught) basic movement and command orders that all soldiers were expected to know upon hearing them, these young men were often in the midst of battle. Fifers (too often young men and boys), served the same purpose. They also served as stretcher bearers (helping to remove the dead and dying from the field). Mostly, when boys reached 16 years of age, they took “the musket” and fought on as regular soldiers. (especially in The South). Most did not – owing to the fact that Drummers, Fifers and Color Bearers were some of the first “targets” for the enemy (for obvious reasons). The Drummer and Fifer was also the “heart” of a Unit. Many of these boys were looked upon as “mascots” even as adoptive Sons by soldiers on both sides. A source of Period “popular” story, song and poetry, one in particular - “The Drummer Boy of Shiloh”, told of a heroic young lad who refused to leave his position, beating orders during the hell of The Battle of Shiloh (Tennessee, 1862). He stayed (and fell) in battle when others ran.

As the War progressed, more and more “older” men began to fill the positions (partly out of the need again for young men to take up arms). This was more seen in The Confederate Army (with a lack of replacement troops). Eventually, Musician Corps began to fill the positions more and more. With communication advances, came an end to the lone “Drummer and Fifer”. When seen today, they are more Ceremonial, to harken one's memory back to a time of traditional “martial spirit”. 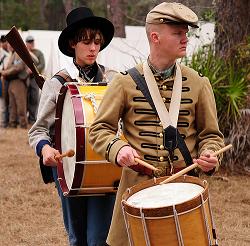