Probably one of the most recognized of Medieval weapons, the Battle Axe was a standard Middle Ages weapon. The famous Bayeux Tapestry, depicting Normans and Saxon's at odds (and arms), has many fine examples of the weapon. Although simple in design, the Battle Axe was effective at cutting through armor. This was accomplished solely on the design of the Axe head. Vertical flanges incorporated in the head, coupled with correct strike/impact force, could wreck havoc on armor. Made of steel, iron or bronze, the Battle Axe could be 2 to 5 feet in length (depending on the user's taste). They could weigh between 1 to 6 pounds. Axe head designs varied much in general shape. Often they fall into the classification of Polearm. On inflicting injuries, they were quite effective at cutting off arms, legs and heads!. Their popularity was based on the fact that they were cheaper to produce than swords (although not as gallant a weapon for a knight). Like Maces, examples have been found at various Mesolithic sites throughout Europe. Richard The Lionheart used one at The Battle of Jaffa (1192) and Robert The Bruce at The Battle of Bannockburn (1314). 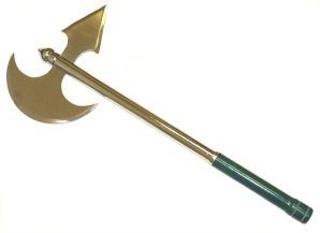