Sometimes referred to as a “Bulwark”, were angular structures that projected themselves outwards from the curtain wall of a defensive structure. They were designed and further developed as artillery and cannon emplacements came into being as a construction attachment for castles and fortifications. In addition to frontwards fire options, a Bastion had two flanking walls. When properly constructed, this would allow for the placement of up to 6 guns (facing the approaching enemy). A wall-walk would be incorporated into the perimeter walls to allow access (and the ability to allow firearms or archers to safely engage their targets as well). Bastions were dominant fortification features between the 16th and 19th Centuries in most Countries. Often other forms of defenses could be incorporated into the design of Bastions. This included Carps and Counterscarps, Glacis and Dry Ditches. Often Bastions were curved slightly downwards (as with a Medieval Glacis), to aid in solid cannon shot being allowed to strike, then roll – down the wall face. Military building techniques show about 11 different types of Bastion implementation. 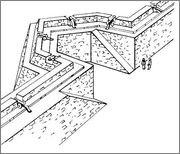