The Roman structure known as The ''Basilica Julia'' was a building was built in 46 BC, near The Public Forum. Named and dedicated by then Emperor Julius Caesar (in honor of his Family name ''Juli'' (or Julius), it would be added too many times during it's service. It served as a Roman Administrative Legal Center (Court), and at time Shops as well as a Bank.. Funding was secured from the ''spoils'' of Caesar's Gallic Wars.

While nothing remains save collapsed foundations and portions of Arches, which decorated the sides of the structure, it may have stood some 100 to 125-feet in height. It may also been roughly 75 to 95-feet in width. The main foundation supported 2 Floors. The Front and Side Facades were decorated with Marble Statuary of various Roman Officials.

Possibly 200 Marble Columns graced the entirety of The Basilica's Facade. The Roof was said to have additional Frescoes and Statues dedicated to Caesar and His Family's Gods.

The Basilica Julia suffered from the same fire outbreaks which plagued Rome throughout it's long History. It was rebuilt at least twice during it's ''life''. It was partially destroyed when The Visigoths Sacked The City in 410 AD. Later, with the establishment of Christianity as Rome's principle religion, a portion of the ruins were converted in a Church. Several massive columns were excavated in the 1850s, as well as several collapsed stairways – which exist today. 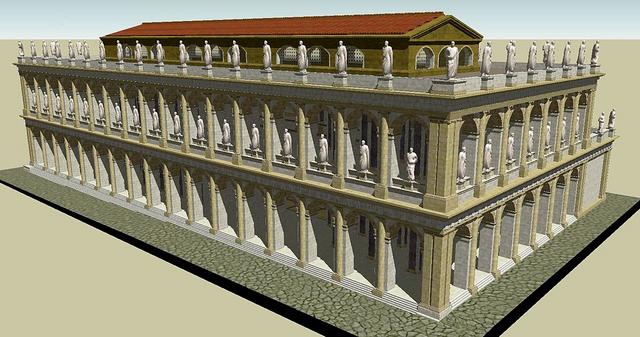