Basil was born in 958 A.D. As an Heir to The Byzantium Throne, he took it as a minor with the overthrow of his Uncle (Basil The Eunuch) in 963 A.D. From 987 to 989, Basil fought a particularly bloody civil war against another Uncle (and Pretender) -Bardas Phocas. Basil II was “assisted” by the Prince of Kiev (Russia) – Vladimir. Basil “gave” his Sister in marriage to Vlad as a “reward” for his assistance. He earned his nickname “The Bulgar Slayer”, when he invaded Bulgaria in 991. Particularly brutal to The Bulgars, thousands died under his Orders. His “legend” states that in the year 1014, he rounded up 14,000 Bulgars – and blinded them! He “spared” “one eye in every hundred, so these could “lead the others home!” In 1018, Basil had successfully annexed Bulgaria into his Territory. He did however, leave the establishment of The Church independent. Basil (fearing Noble uprisings), brutally suppressed his Nobles (so they could not rise against him). The formal “Schism”, developed between The Eastern and Western Churches – partially as a result of Basil). The Pope, (perhaps angry with Basil invading Bulgaria WITHOUT his “”blessing”) - omitted ex-Pope Sergius IV from The Liturgy. Serigus was a fellow Countryman. This “rebuke” was NOT tolerated by Basil, who began to have the Eastern Church “slowly” begin the separation “process. Basil II died in 1025. 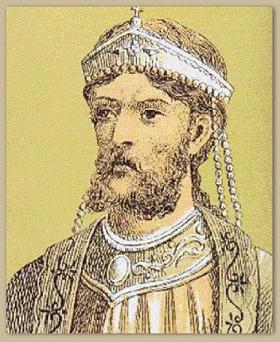