Born in 1650 in a London suburb – Bartholomew Sharp had a relatively short career of 7 years as both Pirate and Privateer. He operated primarily in The Caribbean, with some experience off the Coast of South America. Sharp even lead several expeditions into The Pacific Ocean in search of fortune. He was recruited young to serve aboard a Privateer in service to The Crown during The Anglo-Dutch War, where he learned hi trade. So quick a learner, he soon commanded his own vessel in his early 20s.

However, like most Privateers (who saw great fortunes during War), found his wages dry up after The Dutch War. He turned to Piracy as his income. Sharp would make friends with William Dampler (a well known Pirate), and join his impromtu fleet of Pirate ships. Dampler planned to raid a series of Spanish coastal Towns near Honduras and Jamaica. Sharpe and his new contract with Dampler was very lucrative, for he remained working with him until 1680.

Sharp would later detach from Dampler (on good terms), purchasing his own small Pirate Fleet. He raided well and became a scourge to both The Spanish and English. Despite their best efforts, Sharpe was impossible to catch. However, Sharp's luck ran afoul of a heavily armed Spanish Warship. He was captured and ''surely to hang''. However (and quite unusually), Spain bound Sharp over to England – demanding repayment for damages from one of their former Privateers. The trial (again oddly), had no concrete evidence and Sharp was pardoned by decree of King Charles II.

Sharp left England in 1698 for The Danish controlled West Indies. With no money, he amassed a debt (largely on his former reputation), so large that The Danish arrested him and threw him into Prison. The once wealthy Pirate, credited with several Million Pounds in Gold booty, jewels and countless ships – died a pauper in Prison in 1702. 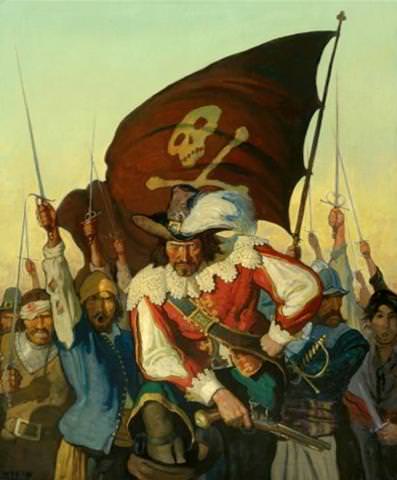