Born in 1682, this Welsh Brigand was also known as “Bartholomew Roberts”. He made his fortune operating off The Americas and The African West Coast. Considered one of the more “successful” of his peers, his known tally of takes and captures is around 470 ships of all classes. Roberts early life is little known, but it is speculated that he went to sea in his early teens. In 1719, as a crewman on the Slave Ship “Princess” - his vessel was taken by a Pirate “Wolf Pack”. Roberts was accordingly given the option to “join or die”. Ergo, Roberts career as a Pirate began. His knowledge of navigation became useful to him (as did his knowledge of The Welsh tongue – which his new Captain (also Welsh), would frequently communicate in as a way of keeping information from the crew). During a battle with a Portuguese Ship, Roberts Captain was killed. The Pirate crew elected him their new Commander (Roberts went from a lowly crewman to Captain in 6 weeks!). Within the next several weeks, Roberts captures many Ships and took much treasure (all to his new crews delight). Roberts is considered one of the “first” Pirate Captains to initiate a “Pirate Code of Conduct”, which all members of the crew AND Captain were supposed to follow (under pain of death or marooning).

Roberts primary vessel was The “The Royal Fortune” (a name he was keep using for subsequent vessels as well). Roberts daring was well known. He had managed to capture The Governor of The Isle of Martinique (and hold him for ransom). This act literally brought trade and commerce within The Caribbean to a stand still for a period. Roberts by this time had massed a proper little “Fleet” of 8 ships and began to expand his operations to The Americas and The West African Coast – concentrating on the lucrative slave trade. Roberts death was in true Pirate fashion. While engaging several ships at one time, his vessel became caught in a crossfire. It was raked with continuous rounds of Grapeshot. Captain Roberts allegedly was ripped to pieces wearing his finest clothes, fighting from the Main Deck. Many historians consider Roberts death the official end to “The Golden Age of Piracy”- and the more larger than life Captains often chronicled. 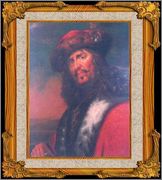