The Thames River was a vital part of English transportation. It served to convey passengers and Cargo from one point to another. Little to no crime was seen on the Riverway then (unlike Streets of London). Barges (or Flatboats), were used as “River Taxis” - to ferry persons. They were “hired” from City wharves and would take their “Hires” safety from one place to another. So to it was for a King or Queen. They too had (much larger and elaborate) “River Barges”. The position of Bargemaster was given to the most Senior Bargeman employed by Royalty. This person had possibly started out as a common Oarsmen (or “Royal Rivermen”). The Bargemaster was the Chief Pilot of Royalty when it traveled on the Thames River. It was also his task to transport (safety) – the Royal Crown and other symbols of Coronation (when traveling by water). With the change in transportation methods and advances in transportation in general – the need for Rivermen and Bargemasters ended. However, in lieu of the “centuries” of faithful service to The Crown, the position still exists (ceremonially). These titled “Commoners” are even allowed to ride next to Royalty on certain occasions. The Bargemaster and Rivermen are responsible for placing and removing The Royal Crown in (and out of) The Royal Coach (for transport). 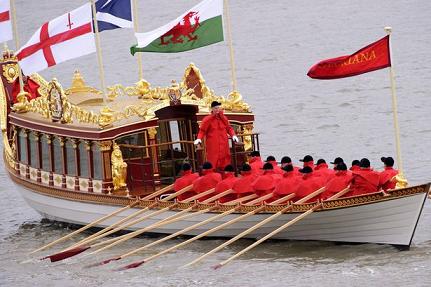