The unusual origins of the “Medical” Profession known as The Barber-Surgeon, grew out of a specific role, designed to serve Male Religious Orders. As discussed, a regulation among Monks in the 8th Century AD forward, involved a hairstyle known as The Tonsure. The Profession of Barber was known, and these Men were often brought in to achieve and maintain this. Often, Monks taught these Men how to extricate teeth, create ointments and the “Art” of “Blood Letting”. Later, the abilities to care for wounds and emergency amputation were added. By the 10th Century, these Men were licensed as “Barber-Surgeons”. They were for a period, the most common Medieval Professions one could attain, often garnering many young Apprentices.

In addition to their skill with a razor at cutting hair, The Barber-Surgeon was also skilled in Blood Letting and the placement of Leeches. It was a common theory that (since Ancient Times), placing small cutting on the body would remove “poor health conditions” by allowing them to exit the body. In some cases (with the very young or old), in lieu of the razor, The Barber-Surgeon used Leech Worms to slowing draw out blood from a sufferer.

During The Middle Ages, a very distinct line was drawn between just what the responsibilities of a Physician and Barber-Surgeon. Doctors were Scholars – who consulted and oversaw the intricate operations that a Barber-Surgeon performed. It was considered “beneath” a Doctor to actually perform an Operation. This in essence, made The Barber-Surgeon an Apprentice – of sorts.

When a more set curriculum for Doctors in training – which resulted in the award of a “Doctorate” (or Degree to practice Medicine), more Physicians came into the forefront of Health Care. Barber-Surgeons slowing began to stop practicing their Medical Crafts, and regulated themselves to the cutting of Hair (again mostly within The Military, or to help in curbing insect infestation such as Fleas and Lice).

The current “symbol” of a Barber today is the traditional “spinning” Barber’s Pole. Seen as a series of Red and White stripes, these too evolved from The Medieval practice of washing out bloody rags used in Surgery. Once rinsed, they would be placed upon a long wooden pole to dry. Bloodstains (left over from improper cleaning), would thus resemble Red Striping. 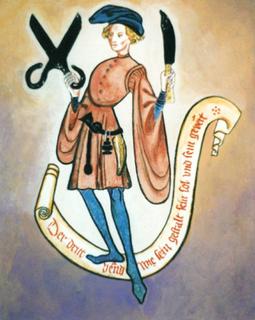