Banner of The Pilgrimage of Grace Rebellion

The Pilgrimage of Grace Rebellion was a Civil disturbance which lasted from 1436 to 1537. It principle Leader was Robert Aske. Together with an “Army” of 40,000 Catholic Supporters, they tried to resist England's King Henry VIIIs Anglican Religion (which he founded to secure a denied divorce from The Roman Catholic Church). The King also formed his own “Protestant” Religion with The Crown as Supreme Head (much as a Pope). Many of his “Catholic Supporters” were upset with his decision which would lead to open rebellion in some cases. The Revolt was one of The Tudor Dynasties worst crisis.

The Rebellion was also supported by several of The King's Ministers, the most vocal being Thomas Cromwell (Great-Grandfather of Oliver Cromwell). Richard Aske (a well known Lawyer), and his Followers citing Economic, Political and of course Religious issues which stemmed from Henry's decision to form his own Anti-Catholic Religion. Wanton acts of revolts (some involving assassinations and attempts) would lead to an eventual Military “crackdown” by Henry VIIIs Army and the Execution of roughly 50 Leaders of The Rebellion.

The designer of the purported Banner of The Movement is unknown (perhaps it as Aske or a local Priest). The very stylized Banner is a Red Field in it's entirety. Centered was a Shield which bore the (4) Body Part of Christ – each bearing the traditional Woods of his Crucifixion. Affixed to the Top of The Shield was the image of The “Crown of Thorns”. Additionally, The Chalice (Last Supper) and Holy Eucharist (both in Gold) are represented. Christ (as King) was represented in his Signet of “I. C” at the bottom of The Banner. 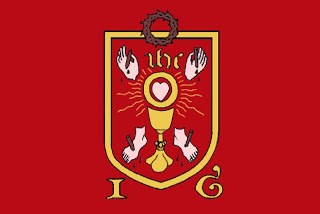