Banner of The Kingdom of Gwynedd

The Kingdom of Gwynedd was located in Northeastern Wales, and were considered a "Successor of Rome", in terms of providing order and rule. Seen in the 5th Century, the ruling Dynasties of Gwynedd were considered the true "Kings of The Britons". Due to Civil War and The Saxon Invasion of 2063, The Kingdom fell. Reconstituted in 1216, the "new" Kingdom of Gwynedd lasted until the English invasions of Edward I in 1283. The Royal Colors of The Standard of Gwynedd was quartered into 4 Cantons. The Upper Left and Lower Right were Yellow. The Upper Right and Lower Left were Red. Countercharges (opposing colors) of Red and Yellow Royal Lions, occupied each Canton. 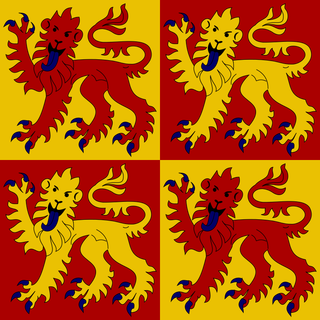