Banditti of The Plains

The term ''Banditti of The Plains'' or otherwise known as ''Prairie Pirates'', was coined by Edward Bonney in American – during the 1830s. An ''Adventurer and Bounty Hunter'', Bonney wrote of His ''exploits'' in several ''Dime Novels'' of The Era. These ''novels'' were akin to England's ''Penny Dreadfuls''. Rather than concentrating on Criminals and Police activities, Bonney told similar version, centering on Western Outlaws. The Banditti were an actual (albeit loosely formed) organization of Outlaw Gangs that terrorized Northern Illinois. They specialized in robberies, cattle and horse thieving and of course – bank robbery and stagecoach attacks. So prolific, The Governor of Illinois considered calling for various State Militia to deal with the problem.

The Banditti also gave birth to groups known as Regulators. These were privately formed and non-law enforcement sponsored vigilantes, who – for all practical purposes, took ''the law into their own hands''. These groups hunted down and fought with The Banditti. When (if) captured, a ''vigilante court'' was called, usually in a field or wood. A selected ''Judge'' would hear the charges with the quick conviction and sentencing of death (normally by firing squad, but hanging was popular as well).

In 1841, a major component of The Banditti were captured by Regulators. A group of 55 armed Regulators were chosen and arranged in two firing ''ranks''. Both Ranks were given an opportunity to fire. Not much was left of the bodies of the Banditti that were executed to bury. While not supported by State or Local Law Enforcement, very little was done to curb Regulators activities. In fact, after 1841, much of The Banditti activity in Northern Illinois stopped, but did not really end. Many would move onto Kansas Territory and become Border Ruffians and Jayhawkers in the 1850s. 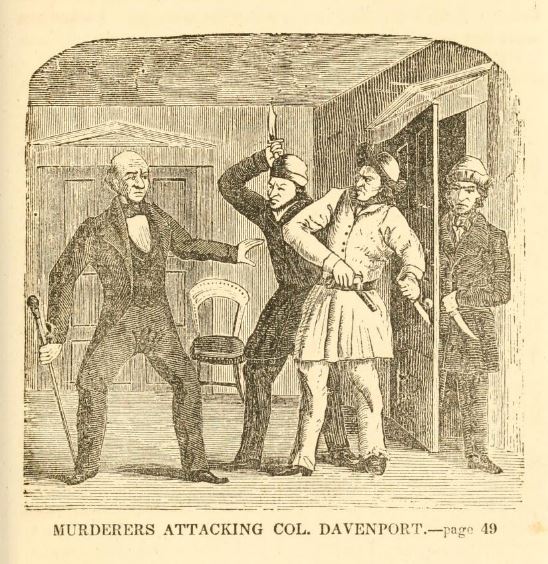