During The American Civil War, an innovative and unusual idea took shape early in The War. Born out of a need for accurate “real time” information regarding enemy troop movements and placements, Professor Thaddeus Lowe approached President Abraham Lincoln with an idea – the use of lighter than air devices, Balloons – for the observation of Confederate positions in the battlefield. While the first recorded use of a balloon to raise a human being off the ground happened many years prior (France, 1794) – the idea of the balloon for other means was slowly taking shape throughout Europe. (the first battlefield application in history was The Battle of Fleurus, during The French Revolutionary Wars). Seen as a “fad” in The United States, Lowe was one of the few men who had the clarity to use balloons to help “win the war”. In fact, Lowe had been experimenting with the possible attempt at the first Trans-Atlantic flight from America to England. The War stopped these pursuits. In theory, the “Areonaut” (as Lowe was called and the term was used) – would be elevated via balloon to varying elevations (a first attempt of 500 feet was made). Tethered to a rope, a Telegraph cable was affixed to this. Lowe was able to observed Confederate positions South of Washington, D.C. (via binoculars). He relayed his observations by cable to Lincoln. The “Green Light” was given to the first incarnation of what would be known as The Union Balloon Corp. Although not all attempts at telegraph use were enacted. The “Observer” would more often write down his observation. Making a signal, he would be lowered.

Attempting to use The Signal Corps (or Pinafore Flag Messaging) was a more “practical” method of transmitting this information to battlefield Commanders. The first Union balloon was named “Enterprise”. Made from hundreds of feet of hand-sewn silk, she was “powered” by heated helium gas. Transported by small, specially made enclosed carts – it often took 3 to 4 such “gas carts” to maintain a 1 to 2 hour ascent and descent assignment. This was probably Lowes most pressing problem. Funding. At first using money, was was befriended by The Smithsonian Institution - for a period. When those funds dried up, Lowe turned back to Lincoln. The US Congress was having enough ussues just paying for the “normal” cost of The War. Lowe was paid from the onset of The Balloon Corps, $10.00 (USD) per day (the pay rank of an Army Colonel). He often used his own funds to maintain his “Fleet”. In addition to “Enterprise”, Lowe had 3 other “large” observation balloons (Intrepid, Union, Excelsior and United States). He also operated (at a much cheaper rate) – 3 smaller versions (Eagle, Constitution and Washington). His Corps. Was around 125 men (at $3.00 USD per day!). This was an unheard of pay scale (when the average Union soldier was paid $13.00 USD Per month!). Lowe also oversaw the first use of his observation balloons used from a Floating Battery. The converted coal Barge “Washington Curtis” was made into a large floating platformed artillery position. Positioned off of the Virginia Coast – she would batter Confederate shore positions. The idea was put forth to carry and launch on of Lowe's balloons and use it to locate Rebel artillery placements. This would be the first “aircraft carrier” (of sorts).

Lowe's balloons were credited with assisting The Union Army during The Peninsular Campaign in 1862 (although they failed to take Richmond). Considered ultimately too expensive to maintain. Transferred to The Engineering Corps, by mid-1863 – observation balloons were ceased in operation. Not to be outdone, The Confederacy attempted to copy Lowe's formula – and created their own Observation Corps. Using silk as well, another variation was a wooden framed, light cotton sheeting device (which actually resembled a modern atmospheric low-altitude balloon). Known as “The Gazelle”, she too had an “aircraft tender” (CSS Teaser). Naturally, scarceness of component parts (and gas) – ended The Confederacy's attempts early. 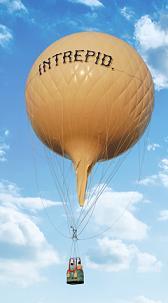