Today, the so named ''Ballistic Knife'' is mostly outlawed by most World Countries. It was a device which was developed around 1959 for use by US Military Special Operations (Green Beret and Navy SEALs) as a somewhat ''close quarters'' weapon. Examples are still in existence today. The weapon is for all intents and purposes – a ''fighting knife''. Blades are more lightweight and designed to be aerodynamic, with regards to ''air resistance'' openings cut directly into the blade itself (machined). On average a blade measured roughly 5 to 6-inches in length. The mechanism by which the knife was ''fired'' was in fact it's metal handle. A high tension spring was compressed, by which either an compressed air cartridge was attached or – a single ammunition shell (sans the round). The .22 round was often used.

Pre-cocked, the shell or ignition system was activated by pulling back on a false tang on the side. This would fire the blade forward. Distances were measured at 20 to an incredible 50-feet. A common issue was aim and steadiness of the firer. Obviously effect (10 to 15-feet) against an Enemy Sentry or related, The Ballistic Knife saw limited service in the late 1960s in Southeast Asia. 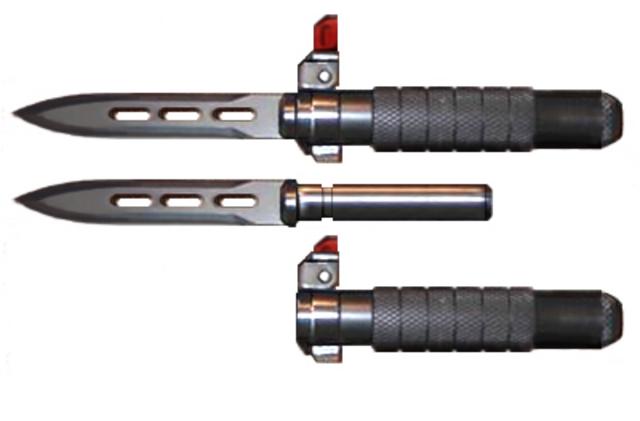