The Roman Ballista was another Roman "artillery" weapon, capable of firing projectiles at great distances at a selected target. Developed from earlier Greek weapons, the mechanics of use were different. Two torsion levers were designed instead of the older "prow" device the Greeks used. The weapons "springs" were several loops of twisted Skeins (a form of coiled twine or silk). Early designs were made to fire heavy darts or pre-rounded stones. Seen in use during the early Republic Period, the weapon was made with winches to be used to pull the skeins backward to their farthest point of tension. The skeins would next be "locked" in place with a hooking/triggering release device. Upon release, the Ballista would relase it's projective up to 500 yards (although some historians put it's range at closer to 300 yards). Casaer too multiple Ballista's with him during his conquest of Britain in 55 B.C. So successful was the weapon that he sent a detachment to Gaul. The Ballista was a mainstay of the Roman Army through it's Imperial Period as well. A functional Ballista crew (normally 2), could fire up to 11 steel darts or bolts per minute. Although no complete version of a Ballista has survived, many of their metal components have. Coupled with fairly good descriptions on their construction from Period documents, modern versions have been reconstructed. 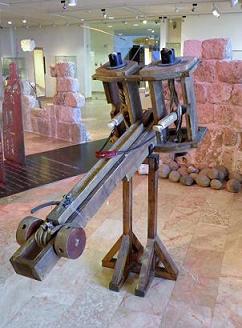