Also known as “Baldwin The Leper”, he was born in 1161. He was King of Jerusalem at 13 years old. Diagnosed at an early age with Leprosy, by the time he was a young man, his face was horribly scarred, He had to wear a full facial mask for formal occasions so as not to frighten or alarm). Educated by William of Tyre, Baldwin had an apt mind for administration and how to implement it. Throughout his reign, his health would wane or better. He was in constant use of Regents.Despite his health, Baldwin was a skilled warrior. His nemesis – the Muslim Warchief Saladin, had tried numerous times to siege and take Jerusalem and other territories within The Kingdom.

Trapping Baldwin at Ascalon, Baldwin escaped and forced Saladin to enter into a truce (1180). The peace lasted for several years until the Templar fanatic Reginald of Chatillon violated by openly attacking Muslim Merchant caravans. His boldness extended to the capture and execution of Saladin's sister. War was declared yet again. Jerusalem was again besieged (unsuccessfully) but Aleppo fell (1183). Baldwin's health steadily declining, he named his 5 year old Nephew (son of his sister – Sybilla), as his replacement. Sybilla and her husband would serve as Regents. Baldwin died of his leprosy in 1185. His young Nephew – Baldwin V, would only rule for a year. The final loss of Jerusalem to Christian control was very close. 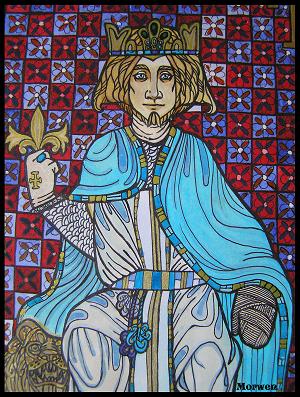