Ancient in design, The Baldric was and is – a standard component with some Military Dress Uniforms. This is particularly true of Military Musical Bands. In it’s original usage, The Baldric was possibly the first form of a Sword Belt. Unlike a typical belt worn around the waist, The Baldric was a strip of cloth worn over The Chest and suspended from either the right or left shoulder. A simple opening and later scabbard, extended from the end. From this, was worn a Soldier’s sword (or other cutting/stabbing weapon). By the time of Ancient Greece and Rome, The Baldric was constructed of sturdy leather. Versions were fashioned from either single or multiple pieces. In some Ancient Armies.

Only Officer’s wore The Baldric. By the 17th and 18th Centuries, The Baldric was redesigned in cloth or heavy linen again. They became a symbol of The Officer Class and were often brightly colored or similarly decorated. Many Navies began to adopt The Baldric as a weapons carrying device (form it’s ease in donning). Military Musical Bands too, adopted The Baldric as far back as the 16th Century, most often being worn by The Band Master or Drum Major. Again brightly colored and embellished, this form of The Baldric was used to make The Band Leader “stand out” when marching or performing. Although most Armies ceased the use of The Baldric by the 19th Century (as sword and saber became obsolete as a battle weapon), The Baldric remained a component with Military and Civilian Bands. 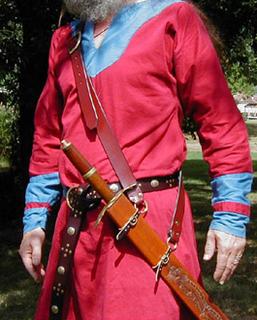