This rapid fire weapon was developed in 1874, by Inventor Fortune Bailey. Although listed as an early “machine gun”, it was technically not. Capable of firing a .32 caliber round (up to 1,000 rounds per minute), The Bailey consisted of 6 barrels (mounted in a “3 on top 3 on the bottom configuration). It featured a large breach cylinder (designed to allow maximum air flow to the breach for cooling). It also featured a “revolutionary process” by which a linen, ammunition belt would feed the rounds into the firing assembly (via a hand crank at the rear). The explosion of the “first round” caused the kinetic energy needed to “chamber” the next charge. Although primitive (and misfires were common), The Bailey was still an excellent example of where weapons technology was headed. Although several prototypes were tested (and briefly fielded) – The Bailey Gun did not catch on. 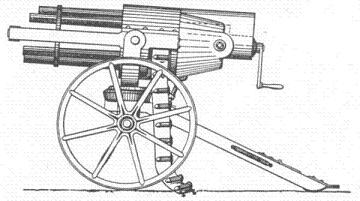